We use hanks on Illusion.  We like the ability to change headsails easily.  Shorthanded it is also nice to be able to just run the jib halyard and not worry about anything going wrong.  This is a helpful ability either in a squall, or in a spinnaker set. When you’ve got time you can pull the jib out of the bow wave and onto the deck.

In the old days when Cal 40’s were used for the Congressional Cup, with full crews and hanks, we did the same thing.  At the weather mark the mastman would just run the jib halyard and let the jib just sit on the bow wave.  The first crewman available after the set would later pull the jib out of the bow wave, over the lifelines and onto the deck.

Racing Illusion singlehanded on Farallon Races I would always gain on my competitors when we passed Point Blunt and had to change from our #1’s to #3’s.  I’d do a bald-headed change, but I’d already have the new sail hanked on under the old one, so I’d just have to drop the old sail, tie it to the deck, unhank it, move the halyard, and hoist the new sail.  At no point in the process was there any risk of losing control of a sail or having a sail blow out of the luff groove.  Meanwhile the guys trying to change a luff groove genoa by themselves were having a very difficult time, and the guys with roller furlers had a hopeless sail shape once furled and were out of the race.

We don’t see many boats using hanks any more in the cruising fleet, but it works great for us.

On Illusion for cruising and deliveries we use a 125% reefable solent jib, and keep it on deck in a jib bag when at anchor.  We didn’t invent this sail.  I first ran across this idea when I delivered the Cal 40 Whisper back from Hawaii after the 1975 Transpac.  I credit the Brauch’s for inventing it although Whisper’s solent jib used reefpoints instead of a zipper and tended to hold water in the reef.

The jib has two tacks and two clews.

To reef the jib you temporarily drop it on deck, roll the foot up, run the very heavy zipper which encloses the rolled up foot, change to the new tack and clew, and rehoist.  The jib goes from a 120 to a short hoist 100.  Having the reefed foot enclosed in the zippered pocket keeps any water from accumulating in the folds of the reef, which can happen if you use reef points.

There are two sets of zippers, blue and white, that are sewn on back to back.  If on port tack it is easiest to use the white zippers.  On starboard tack the blue zippers are easier to use.  Our procedure is to drop the traveller, ease the mainsheet,  slow down, bear off a bit, drop the jib entirely, tie the head down to the pulpit,  pull the sail inside the lifelines, attach the second tack, put the sheet onto the second clew, pull the new foot sort of tight by temporarily tying a hitch of jib sheet around the shrouds, take the old clew up and forward and tie it to a sail tie that is in the right place.  Then roll the foot up and away from you until the two (identically colored) zippers meet, zip the zipper, tie the zipper car so that it won’t move, untie the sheet hitch at the shrouds, untie the halyard hitch at the pulpit, and hoist away.  It takes less time that it sounds, is easy, avoids an extra jib, and avoids an unused jib on deck or a wet unused jib down below.  It preserves all of the seamanship advantages of hanks not the least of which is that you can drop the jib entirely at any time just by casting off the halyard and the jib stays well controlled even if riding along the top of the bow wave.

Reefing the jib has a number of advantages.  The sail has a perfect shape both when reefed and unreefed.  We are able to carry one fewer sail.

For racing upwind, however, we use a lowcut conventional 155% LP #1, and a #3 that is as large as possible but still have the leech fit in front of the spreaders so that we can sheet it inboard.  We do use the highcut, reefable 125% as a blast reacher in Hawaii Races, as well as cruising and deliveries. 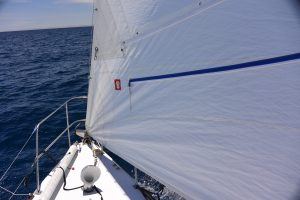