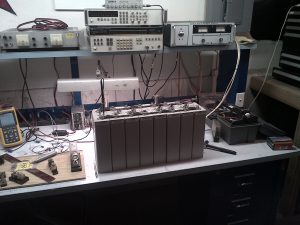 Below there are links to summary notes and schematics describing the LiFePO4 (aka LFP) battery that Stan assembled for use on Sally and Stan’s Cal 40 Illusion.

Schematic of LFP battery and BMS

Here is a paper summarizing the suitability of the navigation light rules (Colregs / IRPCAS) for modern yachts.  It was written by a World Sailing Working Party chaired by Rear Admiral Chris Oxenbould AO RAN (Rtd).  Members of the working party included Stuart Carruthers, Will Apold, Chuck Hawley, and Stan Honey.

The paper suggests changes to the IMO Colregs, to address several areas where the rules are out-of-date and most sailboats over 20m are equipped in violation of the rules.

This is an update of an article about weather and navigation strategy for the Pacific Cup.

Here is a spreadsheet that calculates the loss of a vhf coax in a boat, as a function of the type of coax used and the length of each segment of coax.

This document includes some suggestions for good practices for masthead vhf-ais antenna selection and installation, and describes how coax can be easily tested.

This is an article written by Stan Honey and Ken Campbell on weather for offshore sailors.  It was written for a US Sailing book on offshore safety.

This is an article that Stan wrote for the CCA with safety observations about the 2005-2006 Volvo Ocean Race.

INDEPENDENT REPORT INTO THE STRANDING OF VESTAS WIND  (Version 1.2)
This is an Independent Report that was convened by the Volvo Ocean Race following the stranding of the yacht Vestas Wind on 29 November 2014 on the Cargados Carajos Shoals 240 nm north east of Mauritius while competing in the 2014 – 2015 Volvo Ocean Race round the world.
Chris Oxenbould, Stan Honey and Chuck Hawley
31 January 2015

Below is a link to an article that Stan wrote for Practical sailor that was published in the October 15 1996 edition, and has been posted online in the West Marine Advisors ever since.  It is also included in the recent Practical Sailor book on marine electrical systems.

This is the report from a study on the effectiveness of marine radar reflectors performed by Dick Honey, Stan Honey, Jim Corenman, and Chuck Hawley in September 1995.  It was done with the generous cooperation of SRI International in Menlo Park who provided the use of their state-of-the-art radar cross-section measurement range which was normally used to precisely assess the design of aircraft that seek to minimize radar cross-section.  Eldon Fernandes, the operator of the SRI RCS range and an employee of SRI, provided invaluable support. The study was originally published by Practical Sailor in September 1995.  At the time, Dick Honey was a senior principal scientist at SRI,  Stan Honey was a former research engineer at SRI and VP Technology at News Corporation, Chuck Hawley was the technical director for West Marine, and Jim Corenman was a electrical engineer and active cruising sailor.

The physics of electromagnetics remain the same and the conclusions of the report are still accurate today.  Many of the radar reflectors tested are still popular.  An octahedral radar reflector such as the Davis or Plastimo, in the double catch-rain position, remain a reasonable choice.  The common Mobri radar reflectors are essentially invisible to radar on sailboats that heel.  None of the passive radar reflectors are more than marginally useful offshore where ships might only be using S-band radars.

Finally, sailors should remember that the small boat is both better able and more highly motivated to detect and avoid a collision with a ship than vice versa.  A small boat radar can detect a ship at 12 miles by radar whereas a ship’s radar can only see a sailboat at 3-4 miles.