We have both the diesel fuel tank and fresh water tanks in the keel on Illusion.

The diesel tank is clearly visible, and sits on top of the encased lead ballast.  It is a conventional aluminum tank that is painted with Gluvit (thus the gold color) and sits on two G10 fore-aft runners so that water can pass underneath it from forward in the boat into the keel well.  It is custom made to fill the area above the lead and holds 50 gallons.

We fill the fuel tank directly via the visible port.  We had no easy way to run a fill hose from the keel well to the deck.  It also turns out that filling a fuel tank directly into a large opening is easy because you can see the fuel level, it is trivial to avoid overfilling or spills, and there is never a problem with a vent spurting.  The key is to have a large opening.

Because the vent doesn’t need to have large capacity to let air escape during filling we use a tiny 1/8 inch vent line that is visible coming from the top of the tank.  The vent line is only there to let air in to replace the used fuel, which is very slow, 2/3 of a gallon per hour maximum in our case. The vent line runs to a clear PVC pipe that is inserted in the cabin vertical support pipe, and is full of silica gel.  The vent is open to the inside of the boat through a pin hole at the top of the PVC pipe full of silica gell.  The idea is that the silica gel keeps the fuel dry and keeps moisture out of any air that enters the tank via the vent, and there is no possibility of water entering the vent line because the vent line does not go above deck.  We have to re-dry the silica gel about every 2-3 years to keep it blue.

It seems to work.  The bottom of our tank is clearly visible through the fill port and we’ve never seen any moisture.  My suspicion is that most water in fuel tanks gets there through leaks in the deck fill, and directly via the deck vent when there is green water on deck or during wash downs.   Many race boats use the same approach as we use on Illusion, and fill the tanks directly down below, and only have a tiny vent line that runs high up in the accommodation but does not go above deck, avoiding any possibility for water entering through the fill or vent.

Directly aft  of the lead ballast we have a G10 partition, which is essentially a U-shaped section with the open end of the U facing forward.  That keeps a 4 inch area open clear to the bottom of the keel, aft of the lead, for bilge strum boxes and bilge pump hoses, and it allows us to visually see to the bottom of the keel well.  Aft of that partition is an off-the-shelf fresh water bladder tank.

We use a Vetus TankW160 flexible tank which by itself would hold 42 gallons and be 31″ x 56″.  When in the bilge well it can’t fully expand so it ends up holding about 25 gallons but it fills the area just right.  The upper after corner of the flexible tank is held up and aft by a line around the shaft log, aft of the engine bed.  The upper forward corner of the tank is held up and forward with a lashing to a eyestrap just aft of the inspection hatch.  The lashings don’t hold up the water or take any load but are there just to keep the top of the tank from falling down into the well when it’s empty.

We put the freshwater in the bilge because it was a good use for the unused volume.  It seemed dumb to have a keel full of air, and carry drinking water higher up using  space that could be used for something else.

We use the keel well freshwater bladder as our primary fresh water tank.  We also have a 15 gallon bladder under the counter in the head but we rarely use that except on long passages.

Also visible in the photos is our engine raw water intake and strainer.  The grey/black corrugated hose runs to the cockpit operated diaphragm bilge pump.  The white PVC hose and pipe run to the diaphragm pump in the head, via a Y-valve, so that we can use the diaphragm pump that is associated with our Lavac head as a backup bilge pump.

Our electric bilge pump is a portable, Rule 3800 GPH, centrifugal pump that has a coil of collapsible hose and a long wire with battery clips.  We carry it in a bag as an emergency pump.  It’s handy having it portable and powered via battery clips, because it is easy to loan out if another boat needs to borrow it. 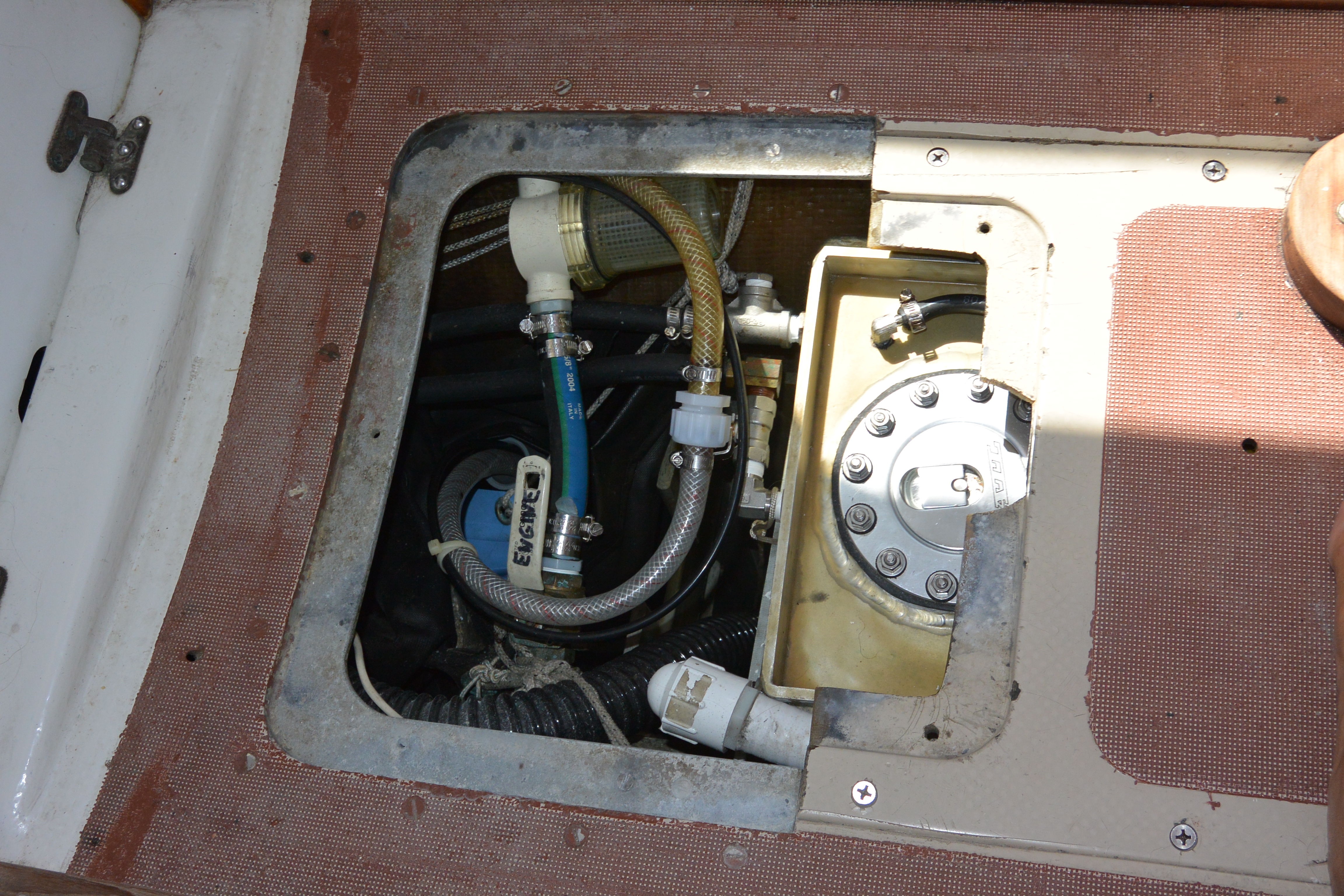 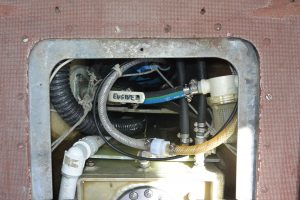