This is a sail crossover chart for ILLUSION, which is a stock, class, Cal40.  Note that the true wind speed (TWS) index is vertical along the Y axis, and the true wind angle (TWA) is horizontal along the X axis.

Also note that if you look carefully you can see lines showing the apparent wind speed (AWS) and apparent wind angle (AWA) as dashed lines plotted within the graph.   Of course the polar data for ILLUSION was used to compute the AWA and AWS numbers.

The dotted lines along the left and right side are the VMG upwind and downwind conditions.

The sails have far more overlap than shown.  The plotted boundaries are about in the middle of the overlap between sails.  Sailors have to decide when to change based on wind-weight, wind-twist, seastate, and expected future weather.

The J1’s are conventional, deck-sweeping 155% genoas.  The BR (blast reacher) is a 125% high cut which has a zipper reef to about 95% overlap with a short luff.  The JT (jib topsail) is a 155% high cut.  The HA (heavy air spinnaker) is a full size symmetric but with two-ply 1.5 oz nylon all except for the center where it is single-ply 1.5 oz.  It has very heavy tapes.  This is the spinnaker shown in the photos above of Illusion.  We’ve carried it in up to 45 knots so long as the seastate is manageable.

The chart doesn’t show staysails.  We nearly always carry a genoa staysail under the JT and BR and reefed BR.  We carry the genoa staysail alone but still on the staysail stay, with a triple reefed main when beating above 30 knots until about 42 or so.  Above that we change plans or heave to.

The A-sails are conventional modern designs.

The J3 is a 110% where the leech fits just in front of the spreaders so that it can be sheeted inboard, inside of the upper shrouds, letting the Cal40 point high.

There is no J2 because in our view Cal40’s hate J2s and can’t point with them because J2s have to sheet wide outside of the spreaders.  We instead change directly from the J1 to J3. 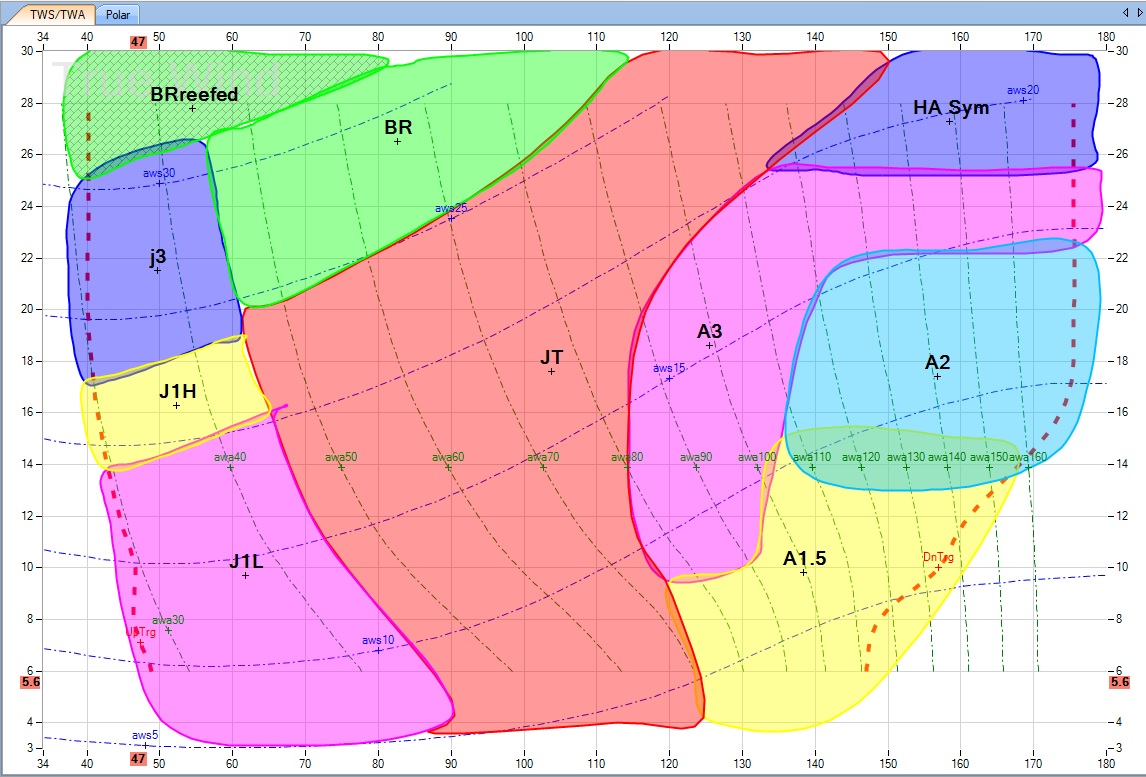