When cruising Illusion we temporarily install an anchor windlass.  When racing, the windlass comes off and we have a painted G10 plate that attaches to the deck with the same fastener holes and is painted to match the deck.

When cruising we carry 200 feet of 5/16 G4 chain, 250 feet of 3/4 nylon rode, and a 44 lb Rocna anchor as our primary ground tackle. We have only used the nylon rode once, when we had to anchor in a depth of 100 feet in Alaska.  We carry a Danforth HT20 for a stern anchor and a Fortress FX37 as a storm anchor with associated rodes.

We had the normal headaches with the chain “castling”, i.e. piling up into a cone, then toppling over, which makes a major hassle to pull the chain out the next time you drop anchor.  The frustrating solution, especially when doublehanded which is nearly all we do, is for one person to be in the forepeak spreading the chain around.

We stumbled on a terrific solution for Cal 40’s.  The Cal 40 has a web that attaches the two sides of the hull in the forepeak locker.  Forward and below the web is a space between the web and the hull, that extends down under the storage area under the forepeak bunk, and opens to the bilge just forward of the mast step.  As you can see in the photos, we cut a round 6 inch hole in the web, positioned just where the chain falls.  The chain neatly falls through that hole and then slides aft and down.  All 200 feet of 5/16 chain fit between the web and the hull, and the weight ends up much farther down and aft than if the chain just sits in the chainlocker.  It works so well we wonder whether Lapworth had that in mind originally.  It is the best solution to chain castling that we’ve seen on any boat.

We tie the nylon rode up under the gunnel to keep it dry and out of the way.  We can quickly release the coil of nylon if we need it by undoing the clam cleat.

We replaced our bronze stemhead fitting with a fabricated SS one.  The forestay chainplate is in exactly the same location as using the class stemhead fitting, so we are still a Cal 40.  The stemhead fitting includes a roller that is right adjacent to the chainplate.  It is enormously strong including for sideways loads, and adds nearly no weight because it is part of the stemhead fitting.  Having the chain roller be strong for side loads turns out to be important given the tendency for Cal 40’s to sail around at anchor.

We don’t miss the sharp mooring line chocks that were part of the original stemhead fitting.  Instead we mount our mooring line cleats right on the rail so that mooring lines tie to them and have a fair lead without chocks and with no chafe.  I recall that George Griffith expressed frustration that the Cal 40 was not set up this way originally. 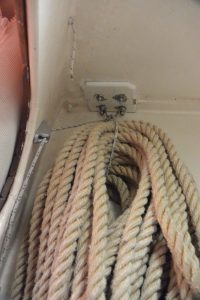 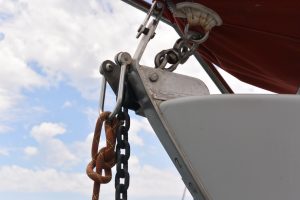