Illusion has a removable staysail stay.  The staysail tack fitting is one third of the way aft from the stem to the mast and the staysail stay, when set, runs parallel to the headstay.  That is all pretty conventional.

The staysail tack fitting has identical pad eyes above and below the deck, with a G10 backup under the deck.  There is a tie wire with turnbuckle below deck.  We tension the stay with a half-Navtec turnbuckle above deck, that is allowed to twist due to the swivel on the Tylaska snapshackle.  There is a twist shackle used to attach the tack of the staysail.  We used the half-turnbuckle on a snapshackle approach so that the hanks on the genoa staysail can slide over it, nearly all the way down to the deck.  On deliveries or when cruising we sometimes keep the staysail hanked on the staysail stay, in a bag, when it isn’t being used so it is very nice that the staysail can slide down close to the deck.

We have a 1/4 inch SS staysail stay for deliveries but for Hawaii races when we want to use the staysail as part of a double-head rig with a JT or blast-reacher for the first 2 days, we use a Vectran staysail stay.  It gets a little chafe from the hanks on the staysail. 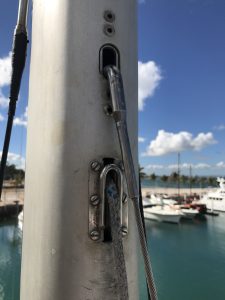 We carry the genoa staysail along with a double or triple reefed main in above 30 knots upwind.  We’ve carried it upwind in 42 knots true on the way from Hawaii to the Northwest, with a triple reefed main.  That was the top end of that combination.

Our removable running backstays attach via T-tangs in the vicinity of the removable staysail stay, which is also attached with a T-tang.  For inshore racing we remove the runners and the staysail stay.

Just below the staysail stay T tang is our topping lift exit. 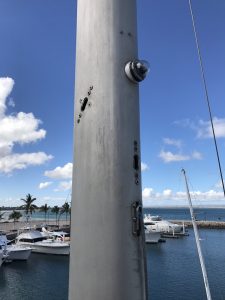 inshore racing mode with no runners and subforestay

We have a somewhat heavier than usual topping lift and sheave, that we use as the staysail halyard as well as for a topping lift.  Once the kite is up we disconnect the staysail stay and lash it aft.  Of course it has to be stowed aft for dip pole gybes.

Beating, in 30-40+ knots, a Cal 40 balances perfectly under a staysail and reefed main, better than if one uses a storm jib or heavy weather jib set on the forestay.

We have kept the normal Cal 40 forward lowers.  They reduce the mast pumping when sailing upwind in heavy air, but for long beats like Hawaii to Alaska or Hawaii to California, it is nice to set the staysail 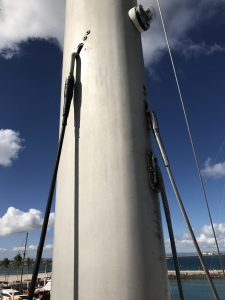 stay and running backs.  With that gear set the mast does not pump at all.

We have Navtec -10 rod everywhere except the backstay is -8 rod.   We’ve chosen to keep the forward lowers but if we sailed without them we’d go up a size on the rods, to -12, on the lowers. 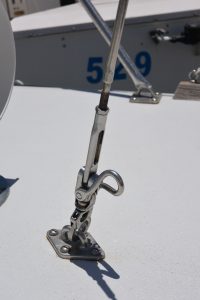 half turnbuckle allows adjustment and allows staysail to drop to deck 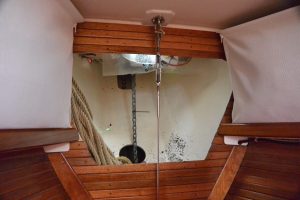 tie wire under deck to bottom of chain locker bulkhead