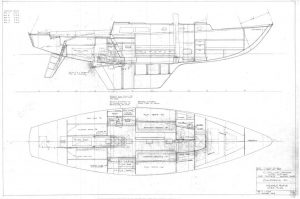 When Sally and I bought Illusion in 1988, she was a wreck, having sat out of the water for 7 years with multiple bullet holes in the hull, no engine, broken rudder-tube, and part-time homeless folks living onboard.  After a very busy two years with lots of help from Ron Moore, Bob Pearce, Alan Wirtanan, and Hap, we first raced Illusion in the 1990 Pacific Cup.

We didn’t know it when we bought her, but Illusion turned out to be a well-known New York Yacht Club Cal40, originally owned by Bus Mosbacher and Vince Monte-Sano.  There is a half-hull of Illusion in the NYYC model room apparently because Mosbacher/Monte-Sano won the NYYC annual regatta or cruise.  Bizzy Monte-Sano visited Illusion when he was in San Francisco a few years ago and filled us in on lots of stories.  Bus Mosbacher skippered Weatherly, sail number 17, in the America’s Cup, so Illusion’s original sail number was 1700.

We bought Illusion in 1988 intending to go cruising, but old habits die hard so we mostly raced.  We’ve raced Illusion to Hawaii 5 times.  I set the singlehanded Transpac record in 1994.  Sally and I won the Pacific Cup overall fleet in 1996, sailing doublehanded.  We won class in the Transpac and 3rd overall in 2003 sailing with Cal40 legends Jon Andron and Skip Allan on our four person crew.  Sally raced Illusion with a four woman crew in the 2005 Transpac and got 2nd in class.  We’ve also won the Northern California inshore YRA series and the offshore OYRA series, and have competed in countless Farallon Races, singlehanded, doublehanded, and crewed, and won our share.

We’ve found that Illusion is a terrific boat to race shorthanded, mostly because the Cal 40 has such “nice manners”.  It steers terrifically under autopilot.  That results in part from the fact that the Cal 40 doesn’t have a wide stern, and so doesn’t try to turn whenever it heels or rolls.    Of course Cal40’s are legendary in their ability to carry sail downwind, as seen in the photos below.  In all of our Hawaii Races, shorthanded or crewed, we’ve never had to douse the kite for control, and the autopilot could steer at any time with the kite up.

In 2014 we finally decided to give cruising a try and sailed Illusion to Mexico.  We spent two years cruising Illusion in the Sea of Cortez and on the Gold Coast of mainland Mexico.  Another year was spent cruising Central America to Panama.  Yet another year in the Western Caribbean including stops in Boco del Toro, the San Blas Islands, Providencia, Grand Cayman, Cuba and finally Key West.  We’re on our way to New England to resume old habits and race in the 2020 Newport Bermuda Race.  Sally and I were not sure that we’d enjoy cruising but we’ve had a terrific time.  Part of the reason is that cruising is stress-free in a boat that we’ve raced so much doublehanded.  The cruising community that we’ve run across thinks that we’re nuts because we’re delighted to sail in lots of breeze, even upwind.

Below are posts describing various upgrades we’ve made to Illusion.    But first some photos…